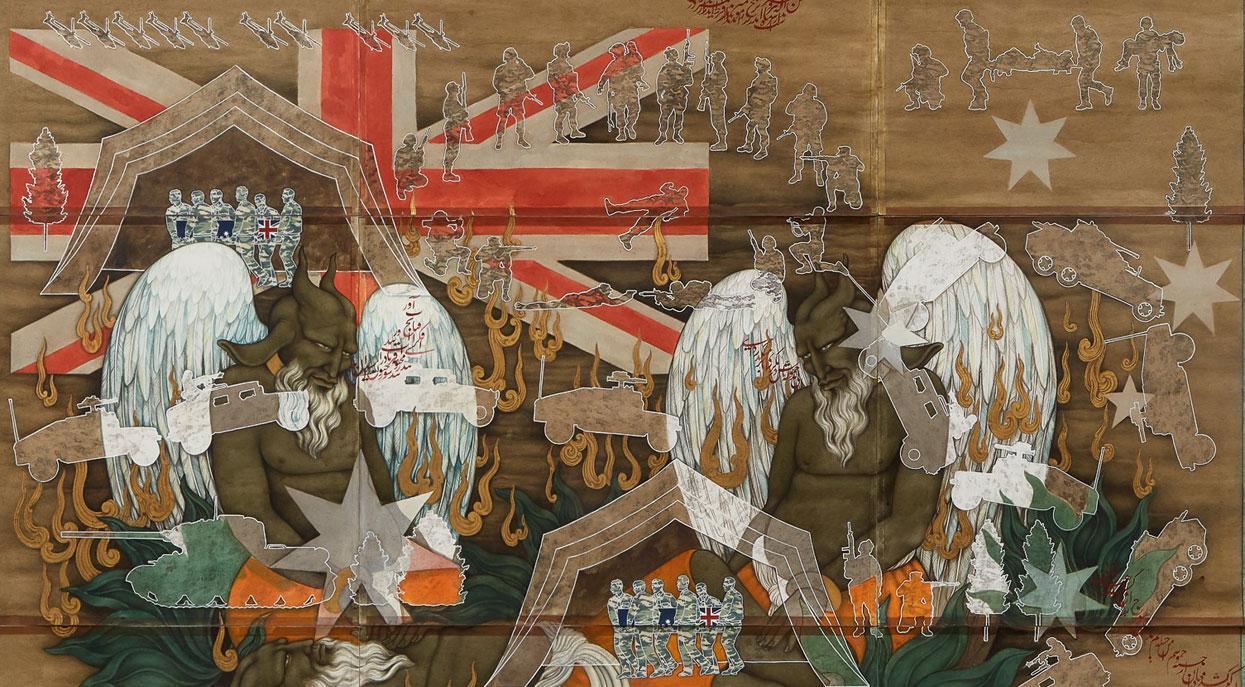 Presenting works from 1970 to today, the AGWA Contemporary collection reveals the wide span of contemporary art practice with its diverse range of media, themes and identities. A recent collection display curated by AGWA Associate Curator of 21st Century Arts Dunja Rmandić gives particular emphasis to the human figure as a conduit of symbols, hero status, myths, cultural references, fantasies and stereotypes across different cultures. While the majority of works feature the human figure in one way or another, a recurring theme sees the subject’s eyes or faces obscured, masked or otherwise turned away, echoing the complexity of identity politics. Read on for Rmandić’s insights on some of the display’s key works. 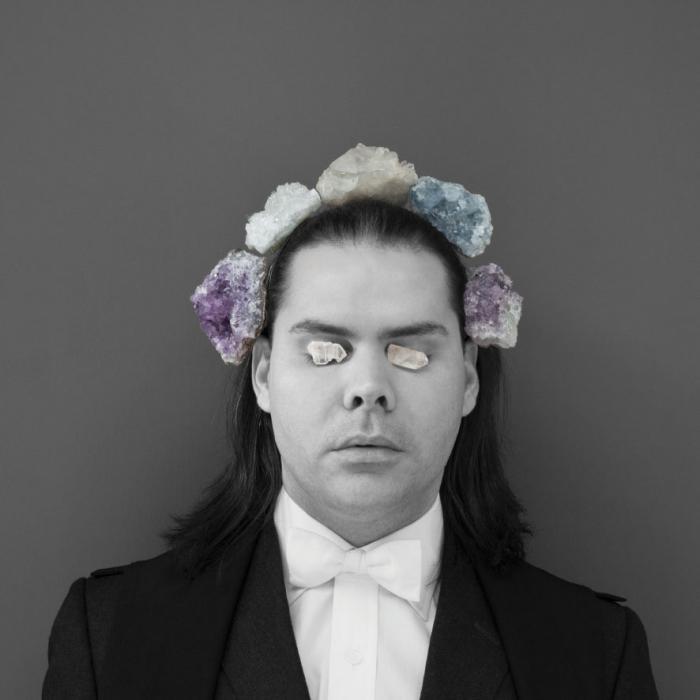 Based on a research project at the Pitt-Rivers Museum at the University of Oxford, Christian Thompson’s We Bury Our Own series looks at ritual practice and the possibilities offered by art for a kind of spiritual—if not physical—repatriation.

Thompson is very mindful of the politics and the semiotics of the gaze and in this series he positions non-Indigenous cultural materials and references into a pool of spirituality and ritual, playing with the ideas of heritage, originality and history. 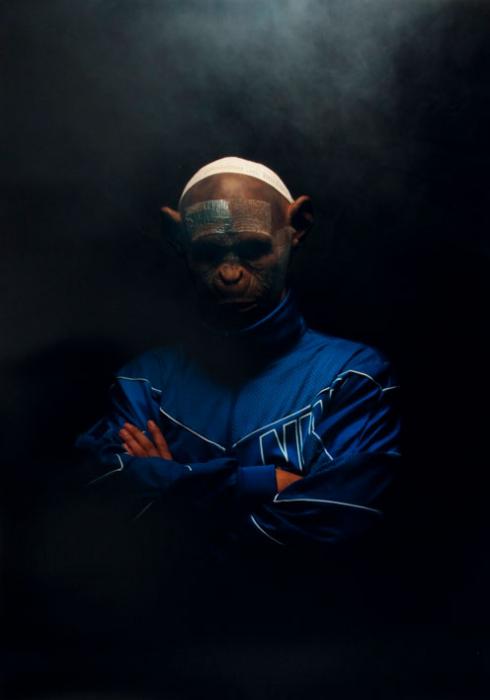 Abdul Abdullah’s provocative Siege series features the artist wearing a mask from the most recent Planet Of The Apes film as a potent symbol of ‘Otherness’ and cultural displacement. Abdullah explicitly engages with politics in his practice and has spoken about how the September 11th attacks in particular have influenced his identity as an artist.

[Abdullah] sees his brother, Abdul-Rahman Abdullah, as being an artist of the pre-September 11th period and himself as an artist of the post-September 11th period. He was a teenager at that moment, and everything changed for him. Overnight, young Muslim men were seen as terrorists, as a threat, as the quintessential ‘Other.’ When you are a minority, and regardless of who you feel you are, your identity can be determined by external factors, with no control over those perceptions and the ways that you are defined and categorized, and they were for Muslim men all around the globe and continue to be for minorities. 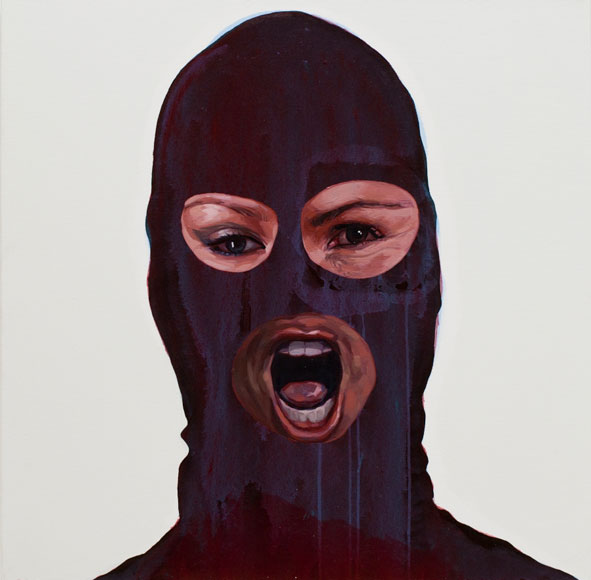 Taken from Abdul Abdullah’s 2013 series Homeland, the balaclava-clad figure we see in Aussie Icons is a ‘composite face,’ featuring one eye each of Kylie Minogue and Elle MacPherson, alongside the characteristically vocal mouth of Lleyton Hewitt.

The unsettling image that results invites us to think differently about these individual’s place in the national psyche—and to what extent this is shaped by their own Anglo-Saxon heritage.

By using white cultural references and signifiers of beauty we’re asked: what would you do if you were confronted by these people in masks? We look at things differently when it’s white people underneath the masks, but they could still be robbing your home. 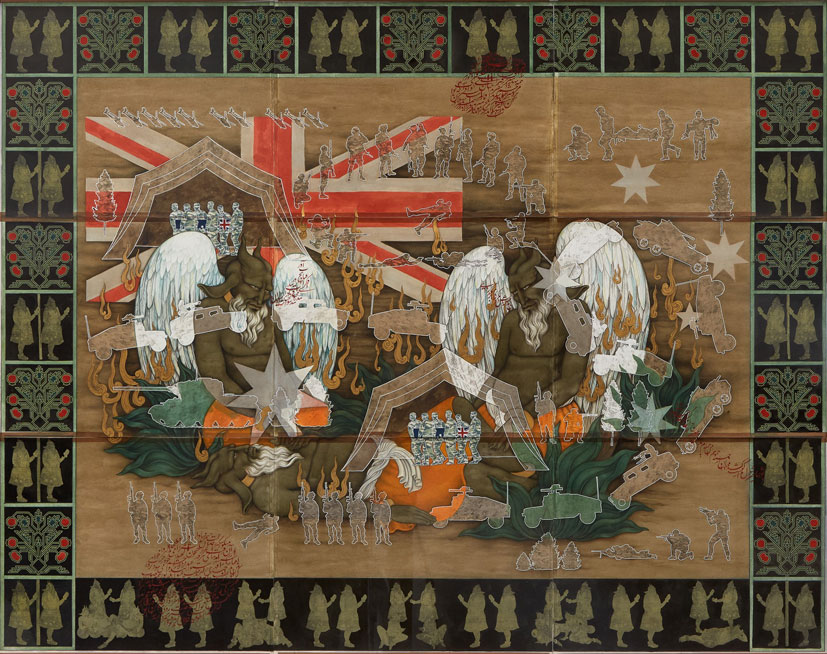 Ali grew up hearing from his grandfather the recitation of the Book of Kings (Shahnama), a late 10th century epic poem composed by Firdousi that marks the beginning of modern Persian language. The poem recounts the virtuosity and shortcomings of kings from the beginning of time to the advent of Islam but also of the powerful forces beyond them, epitomised by the divs or daemons. Reflecting on the way his people, the Hazara, have been treated and persecuted since the 1920s, Ali has used the divs from the miniature paintings illustrating the epic as an allegory of the Hazara.

There are layers of histories with people and countries that we in the West tend to skim over, especially in the media. Afghanistan after September 11, for example, is seen as a very two-dimensional space: a space ravaged by war and difficult people. It’s a simple formula of good versus evil, us and them, that helps dehumanise and desensitise. I think for a lot of people who come from countries where conflict has occurred, seeing that conflict portrayed as two dimensional is a very painful thing. We don’t see the beautiful things that happen in Afghanistan, or hear the success stories; or the stories of people not wanting any kind of war. And we don’t consider that people from those places value beauty, history and tradition the way we do; Ali’s works speaks to all these sentiments. 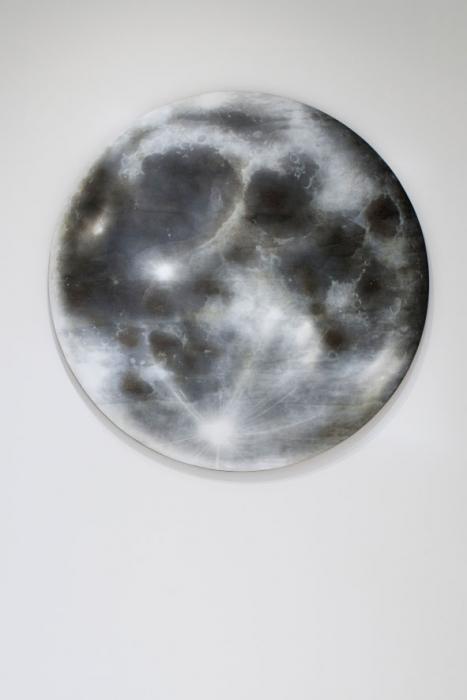 Positioned above the display like the awe-inspiring ‘super moons’ that can be seen when the Earth’s tilt makes them appear low in the sky, Abdul-Rahman Abdullah’s Big Moon brings a sense of universality to the collection of works below it, whilst also carrying its own highly specific cultural meaning.

The moon by Abdul-Rahman Abdullah is referencing the month of Ramadan and for him the full moon represents the halfway point where, as a child, all he had to do was get through another two weeks. What I really love is that he connects the cultural, religious and scientific elements by showing the moon as a celestial object which we all imbue with meaning—a real thing in the universe as opposed to a dreamy kind of cultural symbol.

Harnessing the moon’s cross-cultural significance in this way, its prominence in the space works to unify and balance the disparate and often opposing identities featured in this striking collection of works.