The Micro Galleries, Sky and Garden Gallery, feature works from the Wesfarmers collection and change twice a year.

In celebrating the 1979 building, the Art Gallery of Western Australia is also celebrating the decade in which many cultural transformations happened, locally, nationally and internationally. That Seventies Feeling…the Late Modern examines what that cultural turning point looked like in visual art.

That Seventies Feeling investigates how space is dealt with in relation to the body and how artists worked between memory and immediate experience in a decade that brought political change, cultural movements and shifted the personal into the political.

To add to that conversation, we are displaying Wesfarmers works from the 1970s in the Garden and Sky Galleries, which showcase the work of Brett Whiteley, Jeffrey Smart, Sali Herman, Dick Watkins, Howard Arkley, Col Jordan and Western Australian Artists Carol Rudyard, Tom Gibbons and Douglas Chambers.

Wesfarmers Arts
Wesfarmers own one of the best corporate art collections in Australia, featuring works from early colonial period to today. The breadth of the collection, which began in 1977, includes early views of Australia as a European colony, bark, pole and canvas paintings from remote communities, works by contemporary Western Australia and national Indigenous and non-Indigenous artists as well as artists from New Zealand.

It is a privilege to have the works from the Wesfarmers collection at the Art Gallery of WA and we hope you enjoy the selection of works on display.

This display is supported by Wesfarmers Arts. 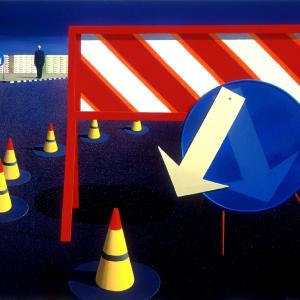