From working with Grammy Award winning musicians to commissions from the likes of Google, Twitter, Netflix and Perrier, Tee Ken Ng is a Perth-based artist, filmmaker and designer with a global reach and reputation. This exhibition focuses on his recent animated music video for another Perth luminary, Tim Minchin.

Presented as an installation of the swirling hand-made zoetropes that bring Minchin’s song Leaving LA to visual life, it reveals the unique and exquisite charm, art and craft of Ng’s animation practice.

Combined with live video projections of the zoetropes in action and an accompanying soundtrack, Ng creates a sense of being within the animation itself as the entire piece becomes a living artwork that will fully encompass you.

“Just when you think you've seen it all, something like this comes along and reminds you that there's no limit to how creative you can get.”
Beast Grip

In conversation with artist, filmmaker and designer Tee Ken Ng 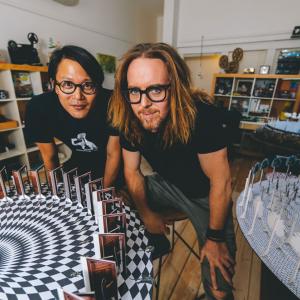 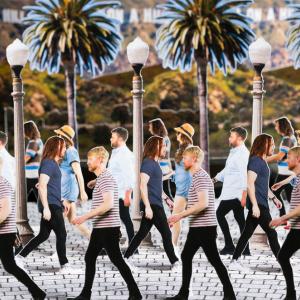 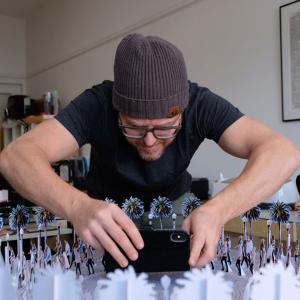 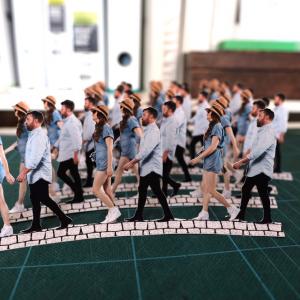 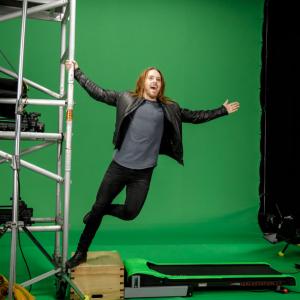 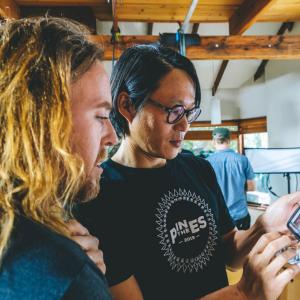 Global phenomenon Tim Minchin is one of Western Australia’s most successful artistic exports. The singer-songwriter, actor and comedian was born in 1975 and attended Christ Church Grammar school where he formed a friendship with Tee Ken Ng. After graduating from the University of Western Australia, he attended the Western Australian Academy of Performing Arts where he honed his performance and writing skills. A completely captivating presence on the world stage, his songs combine deft social observation with a rich emotional nuance that imbues all he does with genuine personal depth and intimacy. Like the very best of the world’s humourists (of which he is included), Minchin exposes and attends to the many layers of the human experience whilst retaining a pointed sharpness and playfulness that reflects an essentially rebellious outlook to life. His achievements and contribution to performing culture internationally are truly enormous and simply can’t be listed here save to note that his musical releases include Darkside 2005, So Rock 2006, Ready for This? 2009, and the recently launched Apart Together, 2020, that features the song Leaving LA; and that amongst many other screen roles he played the character Atticus Fetch in Californication and starred in the ABC TV series The Secret River in 2015; and that he has acted on stage in productions such as The Sydney Theatre Company’s adaption of Rosencrantz and Guildenstern Are Dead and took on the role of Judas Iscariot in the arena versions of Jesus Christ Superstar. He is also the author of two books When I grow up 2017 and Storm 2014. Like Tee Ken Ng, Minchin he is an unstoppable talent whose work the Art Gallery of Western Australia is so proud to present.

Tee Ken Ng is an internationally renowned Perth-based artist who works in animation, video, direction and graphic design. Born in 1976 in Kuala Lumpur, Malaysia, he arrived in Western Australia in 1981. In the 1990s, he studied at Claremont School of Art and Curtin University of Technology. His work in that period shifted from Pop and post-modern inspired painting to ambitious installations incorporating video and animation. The animation component of his early work became a stand-alone focus for experiments he presented on platforms such as Vine and then Instagram, where he learnt to creatively operate within the confines and possibilities of specific (and rapidly evolving) technologies. His short works were expressive of his openly inquisitive spirit, warmth and humour and won him a devoted follower base and subsequently commissions by global clients such as Apple, Google, Twitter, Netflix, BMG, Samsung, Starbucks, Perrier, Virgin, Honda, Toyota and Chrysler, as well as music videos for Jacob Collier and Tim Minchin. Balancing his global success he has been a continuing presence in the local creative scene. Key to this is his branding and graphic output for RTRFM (including 15 years of In the Pines posters) and shops such as Diabolik, Planet Books, Crow Books and New Edition bookshop, work that has seen him literally shape the cultural feel of Perth and confirm his position as one of WA’s most vital and significant artists.

It is one of the most wonderful pieces of animation I have ever seen. The physical zoetropes alone are beautiful works of sculpture. The melding of art and science in making the characters come alive is breath-taking.