Rewinding the Panorama | The Art Gallery of Western Australia
Kedela wer kalyakoorl ngalak Wadjak boodjak yaak.
Today and always, we stand on the traditional land of the Whadjuk Noongar people. 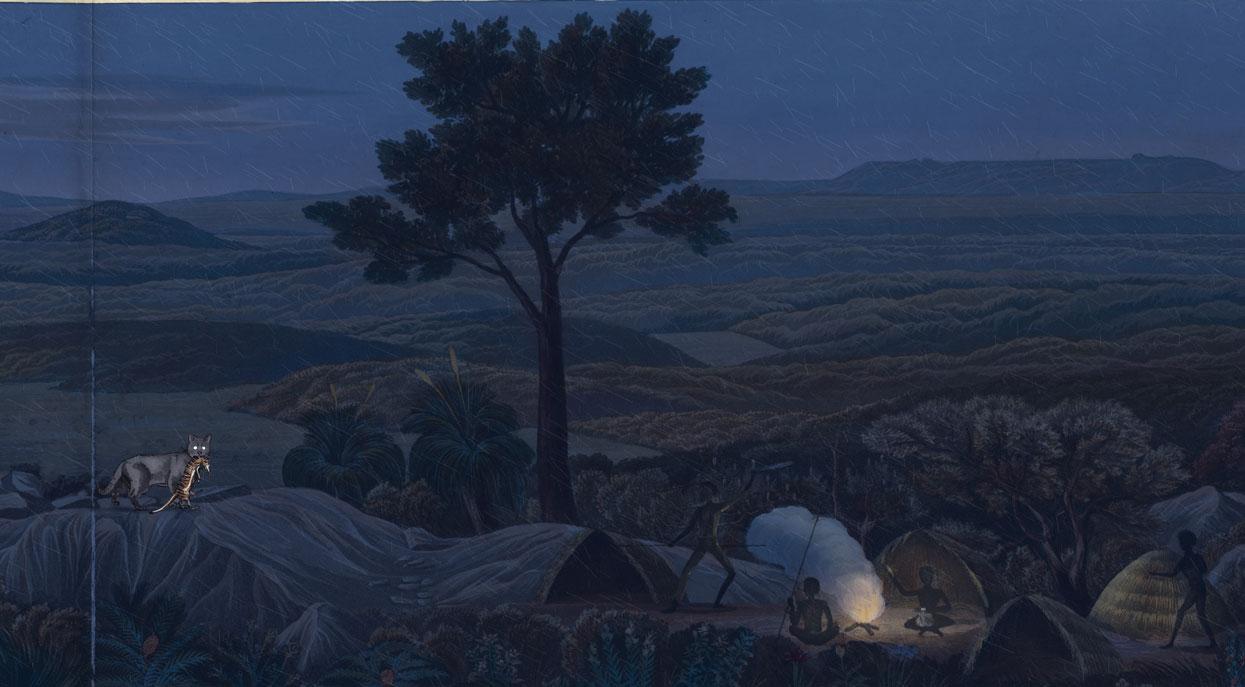 Currently showing at the Art Gallery of WA, The Botanical: Beauty and Peril exhibition brings together works from the State Art Collection and that of Janet Holmes à Court in a wide-ranging, and often bracing look at representations of the Australian landscape.

Among the works on display is the striking video piece Panoramic View of Albany (Kinjarling), The Place of Rain (2019), by Perth-based media artist Sohan Ariel Hayes, in which he reinterprets an 1834 panoramic etching of Albany by British surveyor Robert Dale. 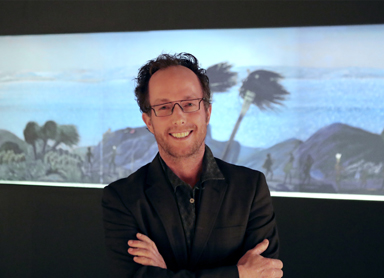 This reinterpretation of a perhaps notorious work in the exhibition – the etching is notable not just for its panoramic format but also the gruesome fact that it was first exhibited in London alongside the decapitated head of Noongar leader Yagan – prompted extensive research into the social and environmental history of the original print. Read on for an interview with Sohan Hayes in which he shares his insights on a number of concerns and themes raised in his work.

Working with archival materials has been a key part of your practice for some time now. What was it about this Robert Dale etching in particular that captured your interest?

The panoramic format first grabbed my attention – I can’t think of any other panoramic images done in Western Australia before 1900, so it’s kind of unusual. Then there are these striking tableaux of Menang people and soldiers across the foreground of the view. From all the research that we’ve gathered, the view appears to be nineteenth century real estate propaganda. I mean it looks quite beautiful – it’s a picturesque image of Albany a few years after settlement – but actually its purpose was to sell something. It’s advertising a land opportunity and was a powerful vision that attracted investors to the Swan River enterprise. In the act of doing so the work becomes a story about dispossession: the stripping of the rights of the Menang people without their knowing or consent.

Can you tell me a bit more about the research process that went into developing this work, and how you drew out the ‘invisible histories’ in the original?

This work has also been reimagined by other Western Australian artists, Christopher Pease and Gregory Pryor, so those works feed into the dialogue around this one. A key link has been conversations with (Menang Noongar Elder) Lynette Knapp and (WA botanist) Stephen Hopper. Stephen Hopper had actually just done a couple of lectures on the fact and fiction of the Dale panorama. So I went and spent some time with the two of them, using Stephen’s scientific background and Lynette’s Menang/Noongar knowledge. And we just did these passes across the painting and all of this detail came out of that. Obviously we can’t include all of that detail, so there’s this emotional, intuitive response which comes out in the work; a simple shift from day to night, from summer to winter storm, this rain like tears when these monsters begin to appear.

With this work being specifically commissioned for the exhibition, was there any sense of responding to AGWA as a historical and cultural site itself?

Good question. Dale’s print has been shown regularly in the past by AGWA, but never alongside the descriptive pamphlet by Dale which was originally distributed with the print and an illustration of the head of Noongar warrior Yagan. By placing this new work next to the original print, the intention is to trigger a dialogue between the two images. Once you’ve seen the new work, I don’t think you can ever look at the original print in the same way again. 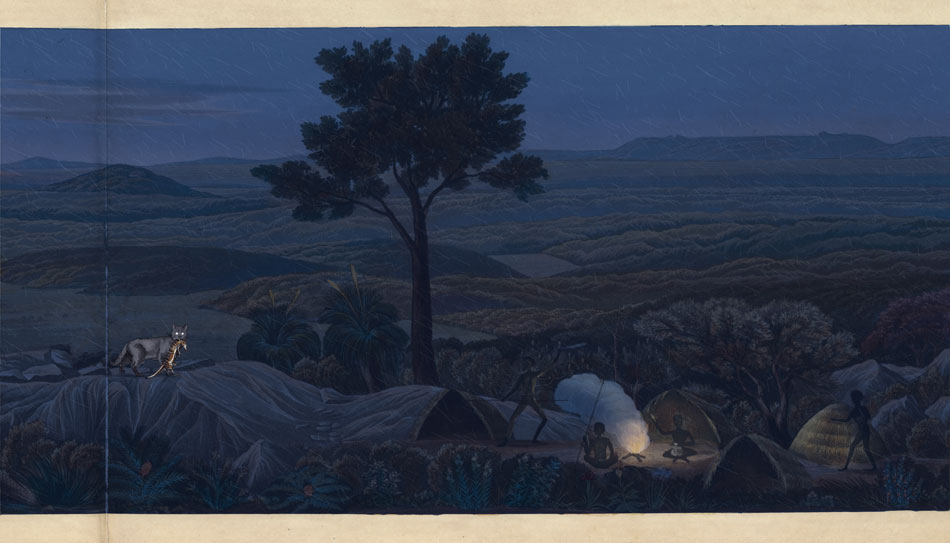 The depiction of a numbat in the mouth of a feral cat is a striking image. How does this representation of invasive species define the work as a whole?

Once The Botanical co-curator Laetitia Wilson and I got talking about how there’s an invading species which is the Europeans, at the same time they are also bringing along other invasive species – rats and cats and rabbits and so on. So we started to play with images of those invasive species becoming feral and all the killing that has resulted and continues as we speak, every night and day. The fat cat is a monstrous image and, as a phrase, often represents someone who’s got too much wealth and has become gluttonous.

The work shows a huge storm sweeping the landscape, which then dies away with clear skies returning as the video loops. Does this hint at a sense of hope for how we might approach these issues differently in the future?

This was an idea that came from discussions with Kingsley Reeve who created the sound track for the work. There is a connection with the moving panorama of the mid-nineteenth century which we mimic digitally here – where they literally used to rewind the painting on a scrolling mechanism to restart it – and so we tried to rewind sound and image and found the effect mesmerising. The result is that the work doesn’t really have a start or end – it just keeps oscillating. It suggests a potential for change. In connection with the environment now, if we don’t change course, there is a great storm coming. Or are we already in it?

How do you think the colonial and conquest-oriented mentality represented in Dale’s etching links to wider environmental issues we are faced with today?

This whole capitalist expansion in the 19th century was, in part, a great mechanism of turning nature into profit at zero cost. There was the technology and finances to take advantage of the so-called ‘land opportunity’ here in this country and convert it into profit. I think it’s really important to look back and understand that mechanism, to understand those it benefited and those it dispossessed. After all this is not something that was done once – the engine’s been running rampant repeating the cycle of dispossession all over the entire globe and now it threatens to cost us the earth.

What role do you think art and artists have in bringing public attention to the kinds of environmental issues that are highlighted in the exhibition?

I think as artists we’ve got a responsibility to help tell stories – to make them personal. My good friend, Anna Kosky, who puts together Writer’s Week for the Perth Festival, said she was at a conference on climate change earlier this year and one of the key scientists said that they’ve done all they can, now it’s up to the artists to tell the stories. That’s a big ask, but I think we can help shape a vision, to help shed light on reality, to encourage deep thinking and sustained action.

The Botanical: Beauty and Peril runs until 4 November.