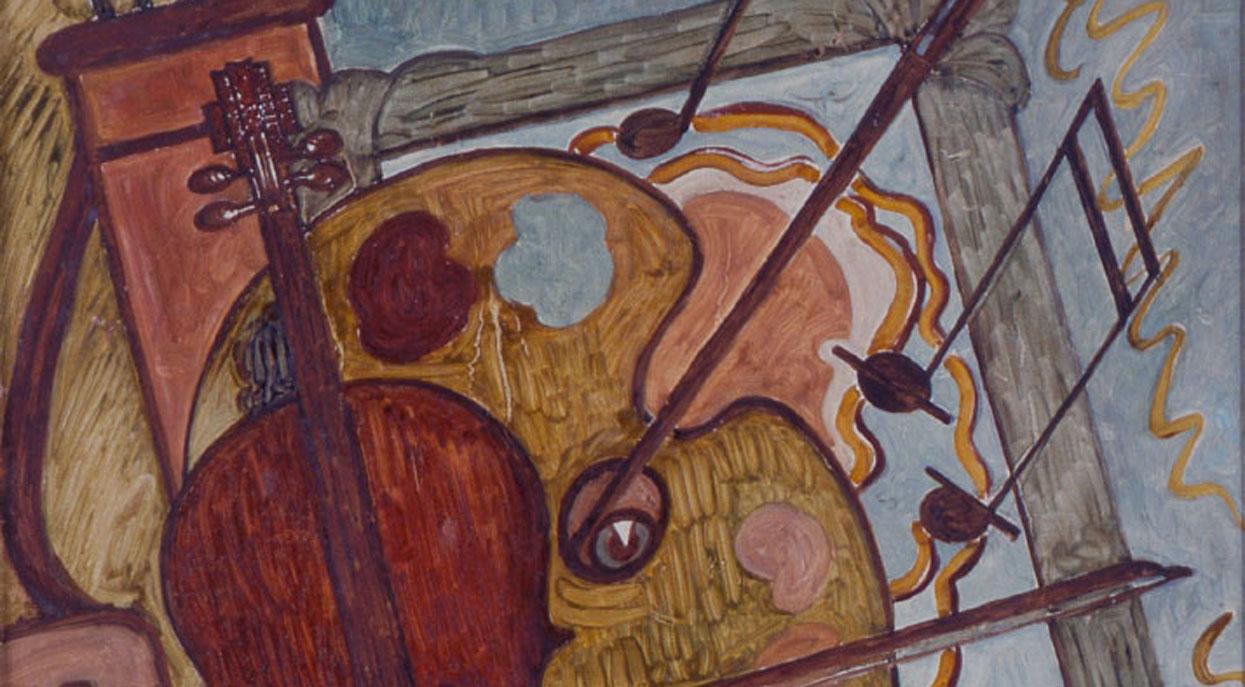 Breaking with the convention of depicting a physical self, Iris Francis’s Self Portrait 1940 is an arrangement of objects that represent various aspects of the artist’s everyday life. Golf clubs, pressure cooker, frame, palette, ‘cello, speak of household labour/duty, leisure and creative activity. While the eye that peers directly out of the thumb hole of the palette might suggest visual art unifies these elements, it equally might indicate that art and its symbols are a mask.

Like many self-portraits, therefore, Francis’s painting is a declaration of individuality and an evasion of its revelation, or even a refusal to tell the “whole story”. With this, the reverberating lines in the background could suggest an energetic extension of self (an amalgam of mind and matter, spirit and body, perhaps) that is larger than the sum of the parts…of a lifestyle, a social role, a gender.

Here, as AGWA Curator Melissa Harpley has pointed out, “experiential reality is collapsed into depicted realities”[1], and if the work could talk it might say something like this: “I am in this space; these items say something about me; but I am not only here; these items do not say everything”. And so, there is a safeguarding, and self-care impulse at play, a shielding of the secret self. 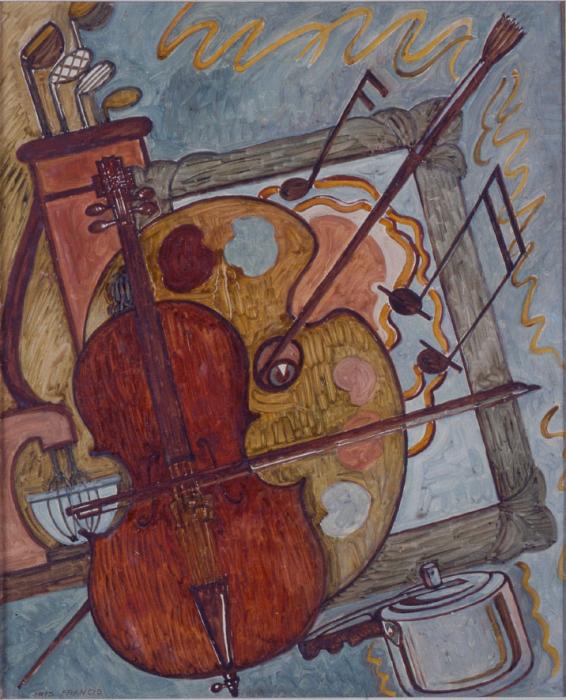 It is worth noting that the work was painted by a female artist during the Second World War. Perhaps, then, Francis’s wavy background captures a sense of the energy of life starting to change for women on the one hand, and it becoming more generally provisional. This idea, of course, brings to mind W.B Yeats famous line from his 1919 poem The Second Coming, written in response to the devastation of the first world war, “Things fall apart, the centre cannot hold”. But in Francis’s work, she holds the centre tight: though for how long and at what cost?; it’s the not knowing that makes the work engaging and oddly satisfying.

A similar pleasure is to be found in Ian Burn’s text and mirror piece No object implies the existence of any other 1967. Like Francis’s work, it was made in a time of global unrest (the Vietnam War being just one element) and snares the viewer in its space.

Burn was an Australian conceptual artist, writer and art historian, whose work questioned the political, economic and philosophical status of the art object and claims for the art experience. This piece was made just after he had moved to America and takes its title from a passage in Scottish philosopher David Hume’s A Treatise of Human Nature, 1739-1740:

There is no object, which implies the existence of any other if we consider these objects in themselves, and never look beyond the ideas which we form of them. Such an inference wou’d amount to knowledge, and wou’d imply the absolute contradiction and impossibility of conceiving any thing different. But as all distinct ideas are separable, ‘tis evident there can be no impossibility of that kind. When we pass from a present impression to the idea of any object, we might possibly have separated the idea from the impression, and have substituted any other idea in its room. [2] 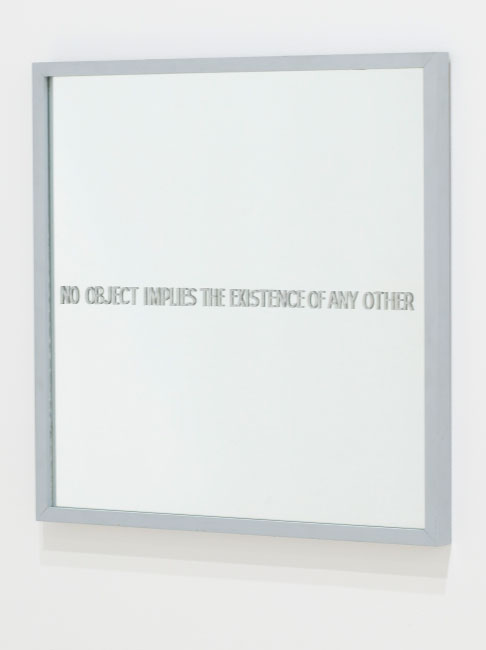 Hume, as this quote implies, was known as a sceptical philosopher concerned with defining the limits of knowledge and, thereby, the grounds by which we understand our world. In response, Burn makes this line of inquiry personal and art historical. As Michiel Dolk has noted of Burn’s mirror works (of which this is just one): “The business of positioning oneself in front of a mirror, as if it were a painting, recalls those efforts to position the observer in front of a painting as if it were a mirror”.[3] Through this tactic, Burn seems to ask us to question the basis on which we know ourselves to ourselves, as well as whether it is us or the artist who made the work. After all, if it is our reflection that we see, are we not, momentarily, the subject and the maker of the art work? And if so, where does this leave the artist, whose own reflection was once “within” the work as he assembled it and looked it over afterwards…especially if, to follow the logic of the title, our reflection does not imply that his being as an artist existed?

Well, it depends on our cast of mind, and your inclination about where to take the proposal. In my mind, it’s an opening, a provocation. But I am logically and philosophically lazy, and more inclined to the psychological. And in relation to that, my own take would be that there is something to be drawn from these works in an awareness of the power of irresolution, and the importance of sometimes stepping around definite meaning.

See, there might be an aesthetic, intellectual and emotional power in a cleanly phrased or depicted problem that artfully resonates within, not just to destabilise or befuddle for its own sake, but to bring our pre-existing inner doubts into a kind of open and surprising conversation with the world.

Which is to say, doubt and uncertainty, the two key elements of the global situation right now, are the qualities that encourage us to connect differently with ourselves, and others. [5]

Notes
1] Melissa Harpley, Beyond the Image: Western Australian Women Artists 1920 – 1960, University of Western Australia Department of Fine Arts: WA, 1990. p.16
2] David Hume, A Treatise of Human Nature, 1739-1740, Book 1, Part 3, Section 6: “Of the inference from the impression to the idea: https://davidhume.org/texts/t/1/3/6 accessed 1 May 2020
3] Michiel Dolk, “It’s only art Conceptually: a consideration of the work of Ian Burn 1965 – 1970 in Ian Burn: Minimal-Conceptual Work 1965-1970, Art Gallery of Western Australia: WA, 1992, p.33.
4] We can also think about the work as a self-portrait by Burn via a representation of his labour (akin to Francis’s work): he worked as a picture framer in America as he had in London previously. In relation the status of the mirror works, Burn remarked in a letter in November 1968: “it is strange how such perfectly simple things, completely normal, no tricky stuff, such ordinary things [like mirrors] can cause so many problems for people looking at them… I don’t see why people don’t look at my mirror pieces in the same way that they look into a bathroom mirror, something with our ordinary existence, not outside of it, isolated, remote, museum-ised”. Given the art world location he was working in and for, such a query is a provocation and a statement of the dual (material and intellectual) nature of his work. ibid., p.73.
5] Yet…. If No object implies the existence of any other, we can also see this neat little story as being exactly that: a fiction made between objects, and signs and symbols and time and place, made between artists and projecting intentions into them.