Roundtable | Media-Space and Art in Perth 1981-1986 | The Art Gallery of Western Australia
Kedela wer kalyakoorl ngalak Wadjak boodjak yaak.
Today and always, we stand on the traditional land of the Whadjuk Noongar people. 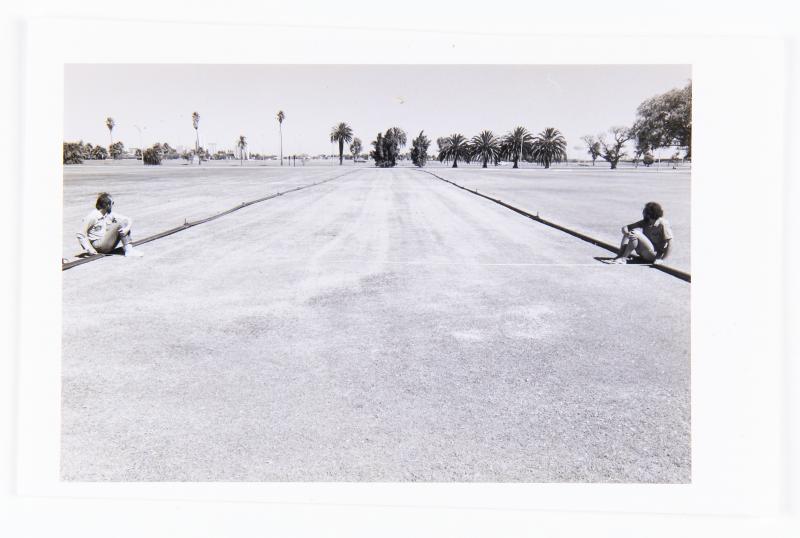 This roundtable will bring together speakers Julian Goddard, Anne Graham and Paul Thomas to discuss Media-Space in the context of experimental art practice in Perth in the early- to mid-1980s.

Focusing on the emergence of activities that challenged the previous condition of art in Perth, this event will reflect on and extend discussions initiated by the group during this influential period.

The first five years of the 1980s was an especially vibrant and dynamic moment in the Perth art scene stimulated by the confluence of structural change (new AGWA in 1979, Centre for Fine Arts at UWA, PRAXIS and its journal PraxisM) and an influx of expatriate artists.

In 1981 Media-Space began by running regular Friday meetings by a small group of artists to develop an 'inquiry model’ that became prevalent in the development of its artistic practices. Over five years Media-Space produced a plethora of publications, performances, installations, videos and exhibitions. Coupled with the emergence of new technologies Media-Space created an environment of experimentation and change challenging the prevailing tropes of art in Western Australia. It became nationally and internationally recognized as a group practicing leading-edge art of the time.

Paul Thomas is Honorary Professor at UNSW Art and Design and currently the Director of the Studio for Transdisciplinary Art Research (STAR) as the founder and series-chair of the Transdisciplinary Imaging Conference series 2010-2022. In 2000 he instigated and was the founding Director of the Biennale of Electronic Arts Perth 2002, 2004 and 2007. As an artist he is a pioneer of transdisciplinary art practice. His practice led research takes not only inspiration from nanoscience and quantum theory, but actually operates there. His current publication Quantum Art and Uncertainty (October 2018) is based on the concept that at the core of both art and science we find the twin forces of probability and uncertainty.

Thomas’s internationally exhibited research projects have been based on working with scientist’s inquiring in specific areas of physics. The current creative practice ‘Quantum Chaos’ artworks are based on experiments done in collaboration with the Centre for Quantum Computation and Communication Technology, UNSW. Publications, Quantum Art and Uncertainty (2018), Nanoart: The Immateriality of Art (2013).

An archive of Paul's practice can be found on his website: visiblespace.com

Professor Julian Goddard has been an academic, curator, gallerist and artist for over 45 years. Recently he was Dean of the School of Art at RMIT University and previously Head of the School of Art and Design at Curtin University. Julian has established several important organisations including the WA Artworkers Union, PRAXIS (Fremantle) - that later became the Perth Institute of Contemporary Art, the journal Praxis M, The Beach gallery and studios, the Australian Centre for Concrete Art (AC4CA) and The Bureau of Ideas. Julian co-directed Goddard de Fiddes Gallery for 20 years - a successful commercial gallery exhibiting nationally and internationally. As a curator Julian has made over 100 exhibitions. He has also published widely on Australian, Aboriginal and Concrete art including award-winning books, chapters, articles, papers and catalogue essays as well as presenting numerous conference papers including international keynotes. Julian has exhibited films, paintings, installations, performances and photography since the early1970s.

Anne Graham arrived in Perth in 1975 after extensive travels in Europe and Asia; she first worked in TAFE and then The West Australian Institute of Technology. She was fortunate in meeting other artist/traveller’s at this time especially Allan Vicents who was the initial founder of Media Space. This was an extraordinary moment for Contemporary Art in Perth and instrumental in informing the discipline of Media Space participants including Anne’s art practice and teaching. She gained a PhD for RMIT in Melbourne and went on to become Head of School and Associate Professor of Fine Art at The University of Western Sydney, followed by Head of School and Professor of Fine Art at The University of Newcastle.

Anne Grahams research interests focus on an investigation of identity and space, she is particularly concerned with creativity and its role in the formation of identity. She creates portraits of people, their histories, their environments and their spaces. These portrait/installations are intended to embrace many aspects of the subject but they are also intended to have universal applicability so that the viewer might feel that these works also resonate with their own life. One aspect of Graham’s interactions has been collaboration with the subjects of her portraiture. In these works she collects possessions, photographs personal spaces and interviews the ‘sitters’ to develop a complex assemblage of material that provides a portrait of their life rather than their appearance. In addition to this research-based performance and installation, Graham creates objects that function aesthetically and have a life of their own but carry with them the intensity of experience arising from the other activities. On occasion these are residues and by-products of the performance, experienced not as reliquaries but as unique and self-sufficient artworks.

After moving to Kanimbla Valley in The Blue Mountains in 2010 the focus of her work became environmental issues. In 2015 she completed a short residency at The Big C Gallery in Bilpin, NSW and where she was introduced to The Gardens of Stone. The Aboriginal occupation of this place dates back at least 11,00 years. This place is in danger and must be saved, her work is intended to draw attention to this environmental catastrophe.

In 1980 one of Allan Vicents first projects was to initiate an exploration of this place that we had arrived in, he encouraged Media Space participants to look around, take on board the politics, the past and present histories of the place and to respond in their work. This methodology has had a lasting impact not only on Media Space members but also on fellow artists and students, the Media Space Roundtable and Exhibition honours his memory and important contribution.