Are you ready for bling!

Building on the success of The Rise of Sneaker Culture and Heath Ledger: A Life in Pictures, AGWA presents the next exhibition in its Culture Juice program: Beyond Bling! celebrating, exploring and making jewellery and adornment. 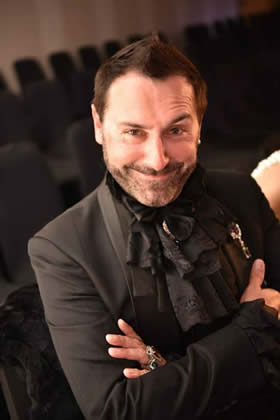 Born in Kalgoorlie and growing up in elegant seclusion in a homestead with his bejewelled mother on the family goldmine (since lost), young Pavlinovich was destined to stand out as a diamond in the rough.

Today, Shane is a man of many jewels and facets – collector of hundreds of sumptuous and flamboyant sparkling pieces; creator and maker or bespoke statement jewellery to the bewitching (and we are talking ‘statement’ here with a capital S); and vibrant man-about-town in Perth with to-die-for bling that would make Liberace blush and Princess Mary jealous. Passionate and knowledgeable about rococo ornamentation and gems, he is officially known on his passport as Duke of Pearl.

AGWA is delighted to welcome some of his impressive collection to the Gallery, to share his enthusiasm with visitors, and to install him, appropriately on Bling Day, Sat 13 October, as AGWA’s King of Bling.

Folks, you have been warned: wear your sunnies. 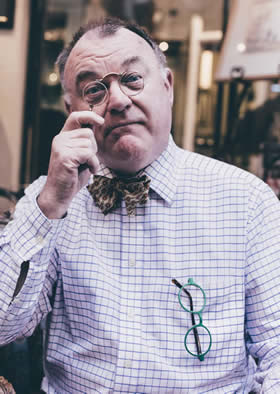 Trevor is the leading light, indeed a rare gem, in Australian historical jewellery and his base Trinity Antiques is the oldest antique store in any capital city of Australia.

Trevor’s background in economics intertwines beautifully with antiques – and his heart is betrothed to early Australian colonial antiquities due to their rarity and increasing demand. Australian colonial pieces are items made in Australia pre-1900’s and are typically silverware, jewellery, furniture, and paintings.

From its humble beginnings 37 years ago, Trinity Antiques has a distinguished history of supplying the greatest number of pieces of Australian historical jewellery to the National Gallery, National Museum, National Library, Parliament House, and many of the state galleries. He will be curating a dramatic selection of nugget jewellery for the Beyond Bling! exhibition and talking at the opening day on 13 October.

His knowledge is extensive and Trevor has stories for days; he is one of a kind just like his store, the history it holds and the stories he tells. We are delighted to showcase his expertise and collection at AGWA.

This display features a century’s worth of highlights from the Georg Jensen archive, housed and cared for in Copenhagen, Denmark. Flown over just for this show it allows us to see the evolution of the now-famed Jensen style and works never seen before in this country.

It spans from 1904, with items made by his own hand, through to works by his studio such as major designers Henning Koppel, and concludes with two remarkable pieces designed in 2016 by the late architect Zaha Hadid, one of the most important designers of our time.

In the early 20th century the Jensen style leapt off Art Nouveau influences and continually evolved, but always keeping the Jensen essence throughout. What is so interesting is that, even with such a strong designer taking on a Jensen commission, the work is always very Jensen, exquisitely made, mindful of the medium and the wearability, that uncanny combination of poise, restraint and flare that is the hall mark of the work since 1904.

This chain and medallion are the first to be worn by the City of Perth’s Mayors and Lord Mayors. It was the official regalia worn by 24 mayors between 1887 and 1957 when it was replaced by a lighter chain. The regalia is inscribed on the reverse: "This badge with chain was provided by the City Council of Perth Western Australia in 1887 to commemorate the jubilee year of the reign of her most gracious majesty Queen Victoria - George Shenton Esqr Mayor." The chain includes 16 silver swans which are also shown on the City’s coat of arms on the medallion

This chain was made for the Lady Mayoress Mrs Kathleen Veryard, for her role as wife of the Lord Mayor Charles J B Veryard, who served from 1964 until his death in 1967. The City of Perth coat of arms medallion can be worn as a medallion attached to the chain, or separately as a bar brooch.