Bringing two obsessions together in Hyperkulturemia 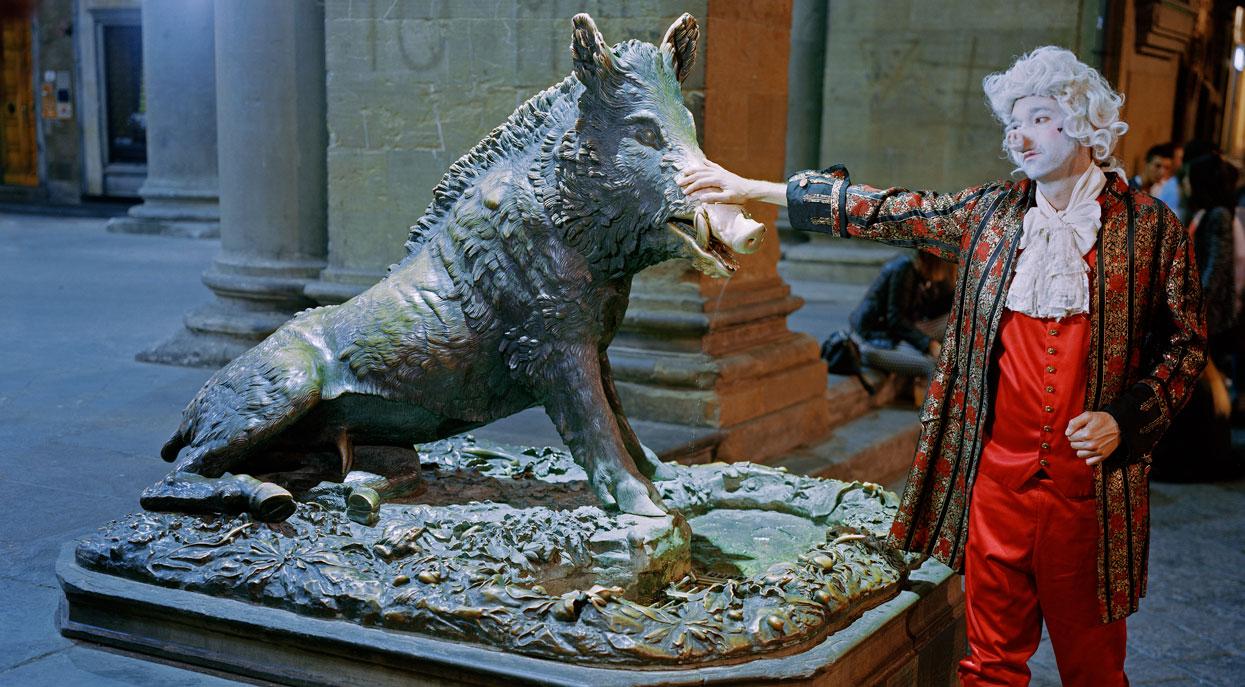 What was the inspiration behind your upcoming WA Now exhibition, Hyperkulturemia? How did you come up with the idea?

Broadly speaking I’m just generally fascinated by the history of the decorative arts, which has up until recent decades been regarded as a less-significant genre than the ‘fine arts’, and also by the history of Britain during the Eighteenth Century. This project brings those two obsessions together.

More specifically, as a child, I was transfixed by a Spode bone china ‘Blue Italian’ meat platter that hung on the wall of our dining room. It was a wedding gift, given to my parents by my paternal Aunts, and in hindsight, it was probably the nicest object we owned. I remember vividly being four or five years old and just standing and staring at it, and thinking that it was the most beautiful object in the world. Soon after I completed art school the design worked its way into my drawings, and I began to research its history. I quickly came to appreciate how it sits within the history of British decorative arts, and how it very deftly reflects the cultural context in which it was first created.

The design mixes an Italianate landscape with a Chinese border, and therefore reflects British taste during the mid-Eighteenth century when the world was opening up to travel, and Britain was in the midst of a very determined (and ultimately incredibly successful) program of empire-building. Much effort has gone into trying to identify exactly which part of Italy the design depicts, and the general consensus is that it is a composite image by an artist on their Grand Tour of Italy.

This inspired my fascination with the history of the Tour, and its aesthetic and cultural legacies. In 2014 I received a Fellowship from the State Government to travel to Italy on my own ‘Grand Tour’ on a knowingly-impossible mission to try to locate the Roman ruins depicted in the Spode design. This ended up developing into a series of residencies over four years in various iconic locations that were integral destinations on the Eighteenth Century Tourist’s itinerary. This exhibition, Hyperkulturemia, is the outcome of that research.

For readers who are not familiar with it, can you explain what the Grand Tour entailed?

The Grand Tour was literally the beginnings of what we now know as tourism. We take it for granted today that it is a worthwhile and enjoyable pursuit to travel to another country and experience its culture, but three hundred years ago this was a very new idea. The world was a much larger and more hostile place, and international travel was very expensive, time-consuming, and quite dangerous. People would only generally travel for reasons of politics, religion or commerce, or for military service, rather than for pleasure. The Tour changed all of that, for better or worse.

In the Eighteenth century, Britain was actively trying to rebrand itself as a superpower, and the Grand Tour was part of this agenda. The Tour was basically the same idea as the modern ‘gap year’. Young men of noble birth would complete their formal education by travelling through Europe for anything from a few weeks to several years. They would visit various countries but always the endpoint was Italy, in order to view the remnants of classical antiquity (since Britain was modelling itself on the Roman Empire), to appreciate the great masterpieces of the Renaissance (as this era also saw the beginnings of notions of taste), and, during the latter half of the century, to travel to Naples and view Vesuvius (which was erupting at the time) and the recently-discovered ruins of Pompeii, the great scientific discovery of the day (which reflected the Enlightenment interest in geology and archaeology, respectively).

…and so the Tour was all about raising the next generation of great young men to lead Britain into a new golden age, however despite these very stoic intentions, most of the Tourists during the Eighteenth century were incredibly privileged, incredibly young men – the majority were still teenagers – travelling away from their families and aristocratic society for the first time, with vast amounts of money and privilege. Hence, and not surprisingly, for the most part, they behaved utterly appallingly, eating, drinking, partying and seducing their way across continental Europe. Countless Tourists caught venereal diseases, fathered illegitimate children, or gambled away the family fortunes in Venice and ended up locked in debtors’ prison…and so there was this tension that I find completely compelling, between these very noble intentions, and the unleashing of this ribald and previously-repressed desire…and during an era when Britain was engaging with other cultures in an incredibly destructive and problematic way, the Tour represents a more benign cultural phenomenon, so it’s something from my own cultural lineage that I felt I could make work about that didn’t need to grapple with, say, histories of slavery or attempted genocide. 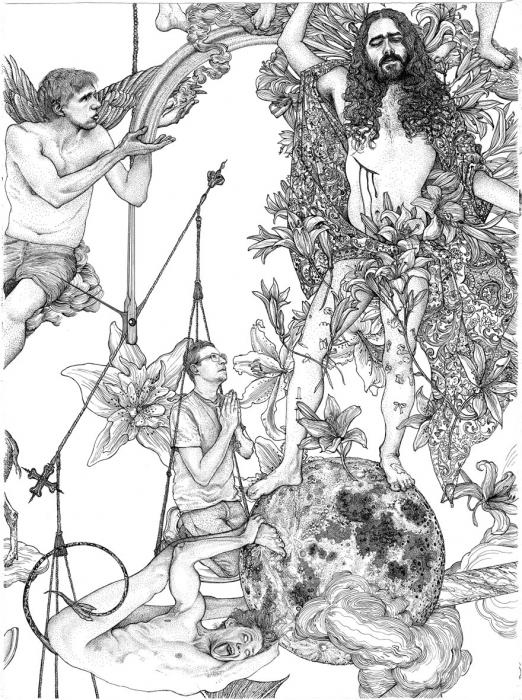 Over time the tradition opened up to aristocratic women as well as young men, then to the upper classes in other British colonies, and eventually to the middle and lower classes via the advent of mass tourism in the nineteenth century. But the Eighteenth Century Tour was the heyday of the tradition, and its influence can still be felt across Britain and its colonies today in everything from the use of Roman columns in civic architecture to the global popularity of pasta and ice cream.

Tell us a bit more about the exhibition title Hyperkulturemia.

Hyperkulturemia is the German word for ‘Stendhal Syndrome’, a mysterious medical condition that allegedly afflicted certain Grand Tourists. It is allegedly a malady that can occur when one encounters great art and becomes overcome, to the extent that one can cry, collapse, or even hallucinate. It has never been officially recognised by the medical profession, I think for good reason, and was much more likely to have been due to the heat and the crowds in the galleries of Florence, plus the fact that most of the Tourists would have been hungover or still drunk, or indeed, actively performing an extreme reaction, in order to demonstrate how sensitive they were too great art. A lot of their reactions were for show – the Eighteenth century was the great age of sensibility and taste, both of which were very new ideas, and very finely drawn, complex concepts, and members of the upper classes were heavily scrutinised by their peers. It was crucial for a young person entering polite society to show that they had refined taste, but there was equal pressure not to appear gauche or that you were trying too hard.

Did you experience it yourself or do you believe it’s more of an imaginary phenomenon?

No. I have on occasion been moved to tears by artworks, though in each case jetlag probably had a bit to do with it, but I don’t believe it’s a legitimate condition. However, I love the idea that an artwork could have such a powerful physically disruptive effect. It’s a really marvellous idea and was the perfect metaphor for this body of work, which explores this unruly masculine desire erupting out of a very sober, noble context. That said, I have made an artwork that once caused someone to throw up, which I still think of as the best review I’ve ever received, but I think that was a one-off.

The composition of each photo appears to be quite elaborate and thought out. How did you go about selecting the locations where the photos were taken?

The photographs are each staged in sites that were significant destinations on the classic Tour itinerary, including Piazza del Popolo (the entrance to Rome during the Grand Tour era), Hadrian’s Villa and Villa Gregoriana in Tivoli, sites surrounding the Via Appia Antica in Rome, and Vesuvius and the ruins of Pompeii outside Napoli…and there are numerous other photographs that didn’t make it into this particular show in other Tour locations. I tried to select sites that were truly iconic in relation to the Tour but were less-obvious than, say, the Colosseum or the Roman Forum. This was to try to avoid ending up with a group of works that looked like postcards but was also a pragmatic decision as I wanted to include a lot of male nudity, and so I had to find sites where this could be achieved. My wonderful friend and model David Charles Collins became adept at surreptitiously stripping off and running into frame so I could get the shot, then running back out of shot and getting dressed again in a matter of seconds. Doing this in a major tourist site like Pompeii was particularly challenging, but also a lot of fun. It was more difficult with the Large Format photographs, as this isn’t a process that can be rushed. The first image we shot on Large Format was at the Nymphaeum of Egeria in Rome at around 5.00 am. The site is located in a public park and David had to lurk in an ancient archway and run into shot in the brief moments of privacy between the scores of joggers and cyclists passing by.

What do you hope viewers will take away from the exhibition?

I hope that people enjoy the work. It’s quite an unfashionable kind of exhibition, very elaborate and idiosyncratic, and very self-indulgent, but everything in the show draws upon a particular historical aesthetic. As with all my work this exhibition is trying to trick people into reading it a particular way, so I hope that at least some viewers are able to look past the nudity and consider the aesthetic lineages I’m referencing. If people can recognise echoes of the Tour in contemporary culture I will be very pleased.

Hear from artist Andrew Nicholls for an insight into his artistic practice and his WA Now Hyperkulturemia exhibition.

Shared histories through art: a path to reconciliation
For Reconciliation Week, we sat down with Sandra Hill to discuss her series, her artistic practice and thoughts on reconciliation in Australia and whether galleries and museums such as AGWA are doing enough or whether more action should be taken.
In conversation with award-winning artist Sandra Hill
© 2021 Art Gallery WA All rights reserved.

10am-5pm, Wednesday – Monday
Closed Tuesdays, Good Friday and Christmas Day
While the Gallery is free to visit, we do ask all visitors to make a voluntary donation as you enter.
Art Gallery of Western Australia
Perth Cultural Centre
Perth, WA 6000

10am-5pm, Wednesday – Monday
Closed Tuesdays, Good Friday and Christmas Day
While the Gallery is free to visit, we do ask all visitors to make a voluntary donation as you enter.
Art Gallery of Western Australia
Perth Cultural Centre
Perth, WA 6000
admin@artgallery.wa.gov.au
+61 8 9492 6600
Stay connected with artmail
AGWA acknowledges Aboriginal and Torres Strait Islander people as the traditional owners of Country throughout Australia and we pay respect to Elders past and present.