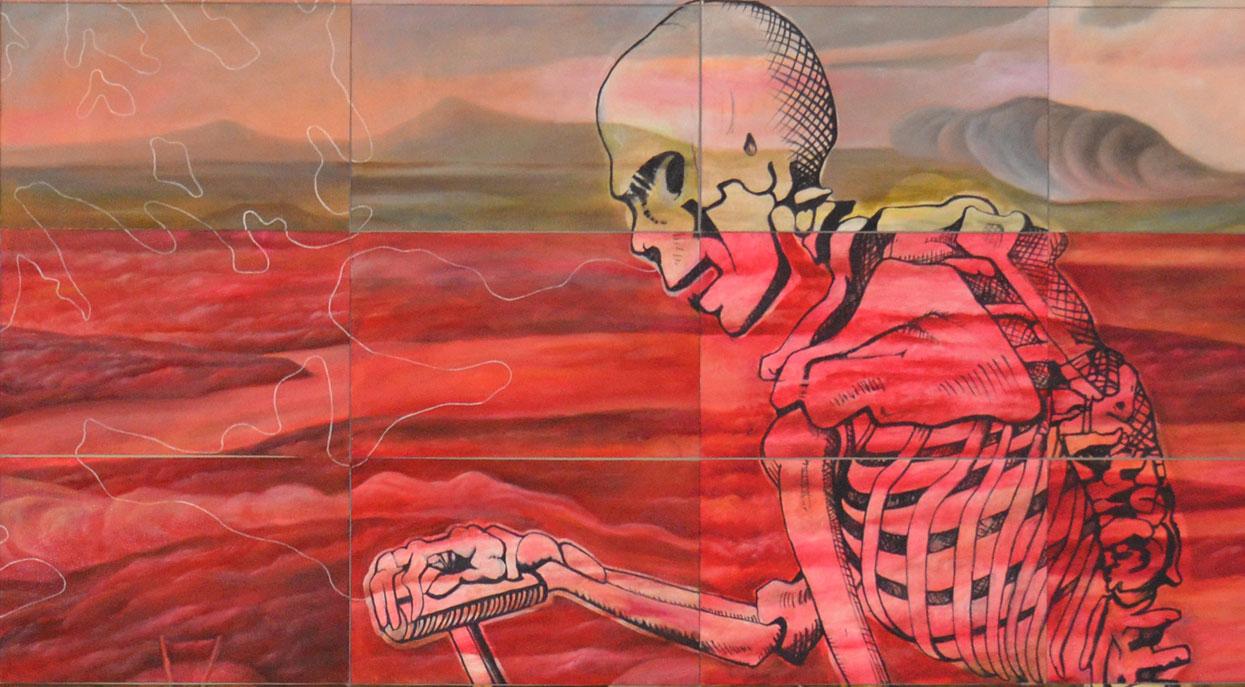 Trained as a graphic designer, Pease dabbled in art throughout his studies and later while working in hospitality. It wasn’t until 1999 that he produced his first serious painting titled Noongar Dreaming. This painting depicts Australian Rules football great Graham “Polly” Farmer’s nephew Peter Farmer standing on the Perth freeway which bears Polly’s name.

Another significant piece of artwork by Christopher Pease titled Reaper is currently on display in AGWA’s WA Journey Gallery as part of the Foundation’s annual appeal. Made up of 42 panels, this impressive artwork relays an important message about colonial Western Australia and its darker history.

AGWA’s Curator of Aboriginal and Torres Strait Islander Art, Carly Lane hosted a live Q+A with Christopher about his work. 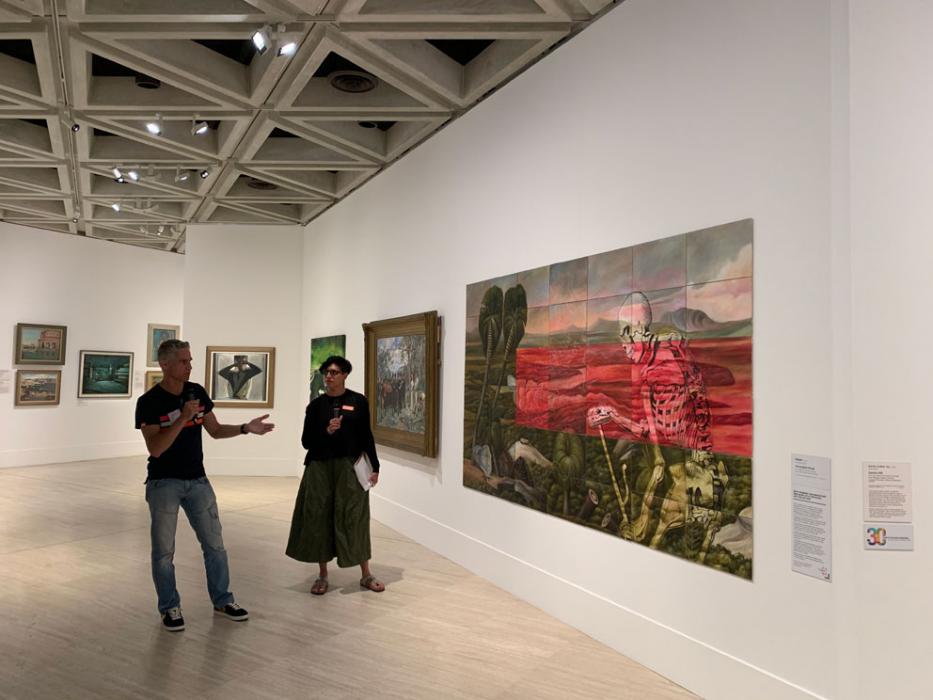 Carly Lane: So, Reaper; what is it about? In twenty-five words or less.

Christopher Pease: In twenty – I don’t know if I can do that. When you’re an artist you find yourself looking back a lot. When you’re a Noongar artist, you’re always looking back. The first references came from my family; my mum, my aunties who would tell stories. After that, you look at the artwork that maybe other people don’t. Like Revel Cooper, I love his work. Then I was going into the museum archives, looking at artefacts and for Noongar iconography specifically, to find a Noongar visual aesthetic. I was trying to build my own visual language and then I stumbled across the Louis de Sainson prints.

Christopher Pease: He was a French watercolourist and draughtsman on the ship Astrolabe which sailed down to Albany in 1827 for a couple of months, and he did some really interesting stuff. There was a lot of early colonial artists that did work that I kind of was interested in because there was no photography and there is this translation that occurs. So, the drawings are made here, and then they go back to London where they’re turned into an aquatint, an etching – a lithograph and so there are sometimes weird things that happen in the translation. You don’t know exactly what’s real, and what’s accurate and what’s not accurate, so I’ve seen a lot of kind of questionable things. Robert Dale’s piece was the big one.

Carly Lane: Who is Robert Dale?

Christopher Pease: Robert Dale was a British Lieutenant who in 1829 arrived at the Derbarl Yerrigan (the Swan River) on the HMS Sulphur, and he ended up being the assistant surveyor to John Septimus Roe. He did a lot of surveying and was involved in projects all throughout Perth.

Carly Lane: But had already built up this skillset.

Christopher Pease: Yeah, his skills were amazing. In 1832 he was in Albany, from January to May and during this time he wrote the account of King George’s Sound and did a series of sketches on top of this hill looking south overlooking King George’s Sound, and that was a panorama. The original panorama is three metres long, it’s a really beautiful lithograph – coloured lithograph – and I wanted to tackle that for years, like really early on, but I just didn’t feel confident in doing it. Finally, a couple of years ago, maybe four years ago now, I thought “That’s it, I’m going to tackle this work.”

Carly Lane: I feel like there’s a bit of déjà vu, because I do want to tell the audiences that we recently had the panorama that Robert Dale drew, and Robert Havell printed up in the Botanical: Beauty and Peril exhibition, and there was another work by artist Sohan Ariel Hayes that was a response to that print that was in the show as well.

Christopher Pease: Yeah. So, Robert Dale, at the same time that he was down in Albany, so was Yagan. Yagan was a cultural warrior here in Whadjuk territory and at the same time, the grants were being opened up in Perth. You’ve got private land ownership happening on the Derbarl Yerrigan, on the Swan River. There was an odd series of events that led to Yagan killing William Gaze. Yagan was caught and sentenced to death, but an outspoken settler named Robert Lyon convinced the judge to send him to Carnac Island instead. He ended up going to Carnac Island and then he escaped by boat back to the mainland. He later appeared at Lake Monger, doing Gidjee (spear) demonstrations, throwing, dancing, and also, in the Perth Botanical Gardens he was involved in events as well, so he was kind of given this kind of unspoken pardon, I guess.

Carly Lane: Julie Dowling, her painting titled Yagan 2016, talks about that event or, you know, it depicts the event at Lake Monger where he was throwing spears.

Christopher Pease: Yeah, yeah, they – they were, you know, throwing targets. You know and there’s a big article in the Perth Gazette where they remarked how amazing he was – Yagan was – his prowess in throwing, you know, weapons. 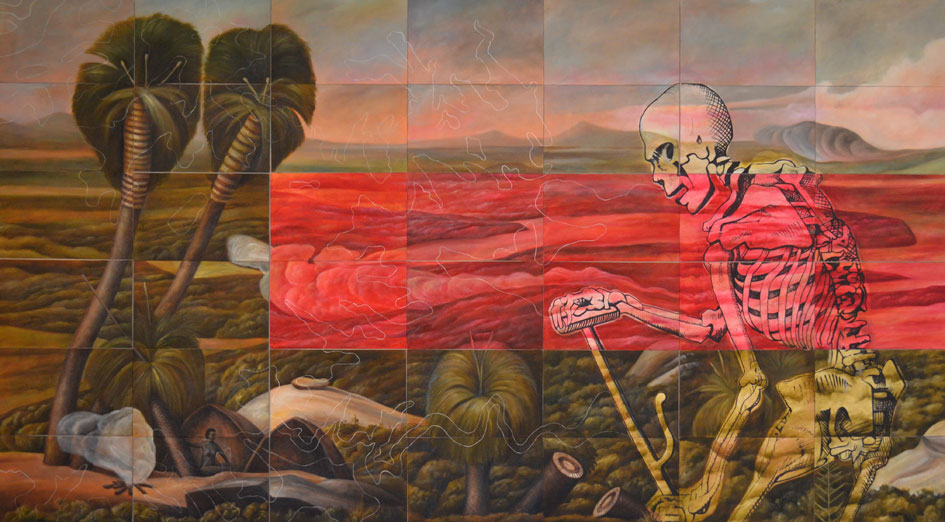 Carly Lane: From what I understand about your most recent exhibition Minang Boodjar, it was a series of six paintings that all looked at King George Sound, and the Dale and Havell Panorama.

Christopher Pease: Reaper recreates the first part of the panorama and there’s a lot of interesting things happening in it. And there’s a lot of the things Robert Dale depicts in the panorama that is quite accurate. In the background, so you can see in the top right prescribed burning that was happening, so yeah there was a lot of prescribed burning. We can see in other parts – in the painting – there was possum hunting. So, some of the things that he was depicting were quite accurate. What happened was in 1833, Yagan was caught trespassing up where I used to live up in Swan Valley near Ellenbrook. He was caught trespassing and he was shot by two brothers, beheaded, and his head was put in a tree and smoked. Robert Dale ended up acquiring the head and in 1834 he went back to London where he looked to make a deal for Yagan’s head. It was during this time he met Thomas Pettigrew, who was a surgeon working in London. He was an antiquarian and he made a deal with Robert Dale for Yagan’s head. Pettigrew would host dinner parties in his home and after dinner, he would display his curiosities to his guests and Yagan’s head was part of that. As a souvenir, each guest was also given a print of Robert Dale’s panorama.

Apart from the back story, there’s obviously the lines in the painting that’s actually the real map of the exact area where the drawings took place and that relates back to Robert’s Dales work as a cartographer and surveyor. I decided to divide it up to represent the cutting up the land and putting up boundaries. The reaper is the reference to death and if you look at tarot cards it also means change which is quite significant for that period as well. It was a fitting image that works well with what was happening at the time.

Reaper is currently on loan and we are asking for your help to give it a permanent home in the State Collection. Find out here 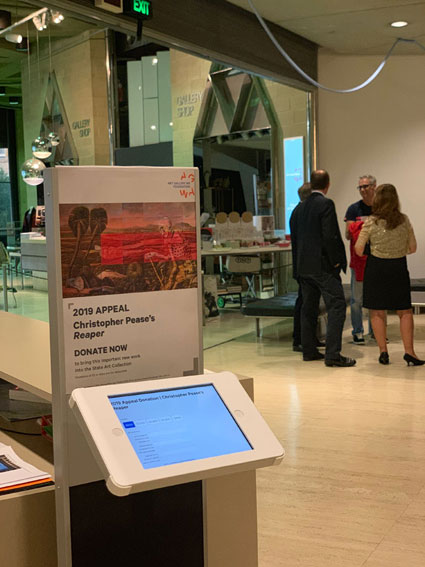 Donate by contacting our Foundation office on +61 8 9492 6761 or email foundation@artgallery.wa.gov.au